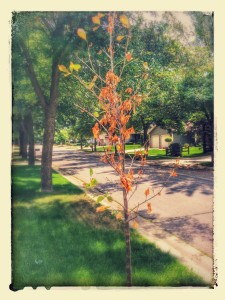 When I moved into my current house ten years ago there was only one tree on the property. It was the green ash out front, a beautiful boulevard tree with that distinct “trying hard to replace the American Elm” look. You know the one. Every house has a tree planted at the exact same time. It turns the street into a tunnel when the trees are mature and in really gives the neighborhood a unified feel.

Then they all die. Monocultures are like that. These trees aren’t just similar trees of the same species. They are exact genetic clones of each other. Their roots graft underground. Their tops get exposed to the same pests and diseases. One day something just comes in and wipes the whole thing out, leaving the neighborhood with a different kind of unified feel.

Not a good one.

Enter, the Emerald Ash Borer. It’s a beautiful insect, but absolutely devastating to green ash. It’s in Minnesota now and coming closer in leaps and bounds due to silly people transporting cheap firewood. It might hit Rochester this year or in ten years.

The ash that so beautifully frame our street are doomed, but I could have just left it and waited. The tree wouldn’t let me. Our beautiful, innocent ash was wrecking our sidewalk. It took the first shot in this war. I took the last.

I had it killed and I don’t feel bad about it one bit.

The forestry service took it down, ground out the stump, and told us that we could plant one of two trees. One of them happened to be my favorite tree in the whole wide world.

The swamp white oak is a wonderful tree. It’s tough, beautiful both in summer and fall, and resistant to many of the problems that plague oaks in this state. I went out and planted one as soon as I could, and for the rest of 2013 it was a brilliant specimen.

This year, however, it didn’t look quite right.

The lower two-thirds looked great, but the top was stunted. Tiny little leaves peeked out eventually, but as the summer came they withered and died. It might have come back. It’s very possible that the tree would have lived out this year and come back strong next. It might have been okay.

I didn’t take that chance.

One day in July I murdered my beautiful oak and replaced it.

The new tree looked great. It was taller. It was greener and healthier. It was straighter. There was no oddly shaped growth.

A few days later the tree sagged. Leaves looked a little weak, like it wasn’t getting enough water. I watered it.

There is actually a disease called Sudden Oak Death. This wasn’t it. This was probably just transplant shock. Or it’s possible I damaged it as I broke up some particularly nasty girdled roots. Soon leaves were shriveled up and dried. The tree was a husk of its former self.

Now every morning I look out upon an ugly stick in the ground. Few pale green leaves cling to the husk of a once-beautiful tree. Maybe it’ll come back. Next spring might arrive with a wonderful, healthy tree. Our neighborhood won’t be empty when the ash all go. Maybe.