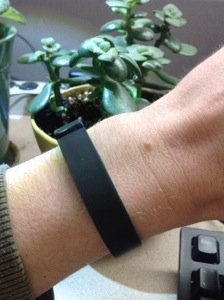 Every year I sign up for a healthy living rebate at work. I record when I exercise or what I eat and at some point I get an extra pile of money. It’s a pretty good deal for me, but I can’t say it’s actually impacted my level of activity.

This year there is a new program which a person can sign up for instead of getting the money. They send a Fitbit for free. I wear the device at all times and presumably at some point I earn points and get rewarded. I’m hoping for little bits of cheese.

I like the program. I’m not thrilled about the Fitbit.

So here are my thoughts on the FitBit Flex:

Asthetics
I feel like I’ve been tagged by the DNR. I thought that a plain, black band would be unobtrusive enough that I’d never notice it, but I was wrong. It gets in the way all the time. Also, it doesn’t have a clock on it, so I’m getting all of the negative side effects of wearing a watch without getting the benefit.

Yes, I could have ordered the Fitbit One, which just goes in a pocket. I didn’t. I don’t know why.

Function
First, let me just state that the FitBit Flex does everything it claims to do.

It just doesn’t do what I want it to do.

I’ve been running a lot. I would like a device that could easily track my run distance and maybe buzz when I pass mile marks. Fitbit appears to have the hardware to do that, but the concept of ‘working out’ doesn’t seem to exist anywhere in the interface. It tracks steps per day and distance per day. If you go for a five mile run it just adds that onto whatever you’ve already done that day. Maybe I’m missing something, but it seems like encouraging overall daily movement is the goal of this device, not encouraging strenuous or varied exercise.

Tracking Sleep
One of the reasons I ordered the wearable FitBit was that I wanted to use it to track my sleep. Apparently the other one does that, too, but you need to put it in a special band. Either way, I found that my sleep was not very good the first few nights that I wore it.

Was I stressed out about my new book coming out? Was work stressing me out? Why did I have trouble sleeping?

I think I had trouble sleeping because I felt like my FitBit was judging me. Every time I woke up I thought about how it would reflect on my daily numbers. If I stay still it won’t know, I thought. I can trick it.

Something Shocking That I Did Not Know About My Wrists
The diameter of my wrists seemingly undergo the most incredible variation throughout the day. It’s amazing and a little bit disturbing. Why do they do this? What’s going on to cause this wild variation? My wrists are not exactly fatty or beefy. It’s all bone in there! Is the actual bone changing? What’s happening here?

I vary by as many as six notches on the rubber FitBit band. Sometimes the shift happens suddenly. I’ll be happily working and then my wristband is choking off circulation and digging into my skin. Sometimes the change is slow, which is somehow actually worse. I’ll find the device dangling on my arm and feel like some starved technophile.

Maybe this is why I never wear watches.

I like the idea of the FitBit. I feel like it’s a step in the right direction and could be pretty cool for quite a few people. I just don’t think it’s for me. I’ll keep wearing it until I get some sort of reward, but I don’t think I can bring myself to wear this all summer long. There will be a time in the future when I do not wear long sleeves every day.