Into the Swirling Chaos

I stare into the swirling chaos of my future and I’m reminded of how much I really depend on those around me. My family, my friends. In this time of social distancing, I’ve become acutely aware of the lines that connect us all as those same lines are stretched taut by the stressors of these times. Uncertainty floods every aspect of our lives, with protests in our streets and a pandemic sweeping the globe. And, this?

As I write this, my last days at IBM draw to a close. After twenty-one years I’m leaving my favorite large multinational corporation, not entirely of my own will. I always considered this ending inevitable–the consequence of working for Big Corporate America. I’ve planned for the worst and, well, here it is.

The timing is bad. Anxiety is bad. The world is broken, and the daily grind that used to be my source of stability is dissolving under my feet.

So, what am I going to be now?

Hello, I’m Anthony W. Eichenlaub, writer, a stay-at-home dad, intrepid adventurer. I do my best to make the world better for those around me. I live my best life, whatever troubles come my way.

This is a whole lot of financial uncertainty for me. If you’re someone I’ve supported on Patreon over the years, you may have noticed I’ve pulled my support, and I apologize. In the short term, I’m no longer able to give buckets of money to charity or the arts, and that makes me a little sad. Once my wife is off furlough, we’ll take another look at the old finances. I have a lot of hope.

But things aren’t SO bad. Uncertainty is not strife. Carol IS on furlough, but she won’t be forever, and her salary is good. There will, of course, be cost-cutting measures. Instead of buying siding for the house, I’ll be painting. Instead of fancy new solar panels, we’ll be drawing power off the grid like peasants. With any luck we’ll do fine on this new level of income.

Things you can do to help if you feel so inclined:

So, expect more posts on this blog. Expect more activity on Twitter and Facebook (but not too much.) I’ll be independently publishing more, but also cranking things up for more long-term traditional publishing. I mean, I might be out of a job, but it isn’t like I don’t have WORK TO DO.

Worldcon was so much fun last year that I decided to go again. This year it’s in San Jose, California, and I’m told there will be no shortage of tacos.

was so much fun last year that I decided to go again. This year it’s in San Jose, California, and I’m told there will be no shortage of tacos.

I’m not on programming this year, but that’s no reason you can’t find me there. Comment here or find me on Twitter. Just because my schedule is unpredictable doesn’t mean I’m not there to meet people.

One of the things I like best about Worldcon is the sheer number of great authors in all of the different stages of their writing careers. This is the first year I have a SFWA membership, so you’ll probably find me wandering the halls in a pack of early-career authors, trying to scrape up the crumbs of wisdom falling from George R.R. Martin as he wanders among mere mortals.

Should be a good time. 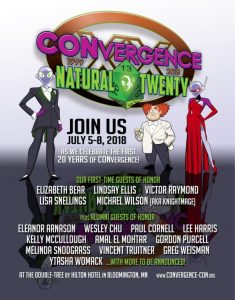 CONvergence is one of my favorite cons, and not only because it’s close to home. It’s a fantastic, intense, and every year I go I find something new. The convention sprawls across several hotels, and even with all that space the rooms are packed with awesome fans and some really excellent artists.

If you’ve never been, well, there’s still time to pick up a pass. This is an extra big year for them, seeing how it’s their twentieth anniversary.

My schedule this year:

When I’m not in panels I’ll be wandering the halls and just generally interested in meeting people. If you see me there, stop and say hi! 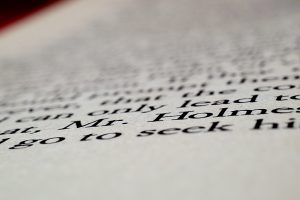 As this stray 2017 gets flushed away by vodka tonics and nachos, I find myself reflecting back upon the year and all its greatness. Sure, it wasn’t always wonderful, but there were some aspects of this year that I was pretty damn happy about.

In this last week of the year, I finally managed to hit my 100 books for the year. As a fairly slow reader, this is a pretty nice accomplishment. I listen to a lot of audiobooks, dedicate time in the evenings to read, and just generally work hard to consume stories.

And some of them were quite good.

Following are some of my favorites of the year. They aren’t necessarily books that came out this year, but they’re books I READ this year. And I liked them.

There were many other great books, but hey I gotta draw the line somewhere, right? You can follow me on Goodreads if you’re really interested in tracking my reading as it happens.

In addition to books, I spent a whole pile of time reading short stories. I’m working on improving my own short story writing, so one of the things I’ve done is crank my reading WAY up. This, actually, made the completion of my 100 book challenge a lot harder. I mean, I made it anyway, but it was tough.

Here are a few short stories I read that really had an impact for me. Some I’m using to teach my classes, while others are just cool.

Oh, and there’s so much more out there. My goal for next year is going to be 75 books and a whole lot more short fiction. There’s so much happening out there in the world of short stories, that I feel like I’m missing quite a bit.

Making the Move to Rochester Above

It’s been quiet around here for a while, but I still exist.

My family has been swept up in the great chaos of moving. We’re not going far. It’s only about a mile, really. But the move takes us to Rochester Above and we’re super pleased with the new house. Also, the view from Rochester Above is pretty nice.

One Week Till Gencon

It’s my favorite convention of the year. Certainly the biggest. Gaming has been a part of my life since before I could drive. I have *always* played Dungeons and Dragons. I probably always will. Board games, card games. All the games. I love them.

These days I spend a lot of time in the Writer’s Symposium. I’m not on programming, or anything. But that’s where I’ll be.

The Gencon Writer’s Symposium is one of my favorite writing events every year. I owe a lot of my current skill to things I’ve learned there. The event draws piles of great authors, from Brad Beaulieu to Howard Taylor. And of course, Kameron Hurley, Elizabeth Bear, and Sunil Patel. It’s an exciting lineup this year and it’s going to be a lot of fun.

Will you be there? Drop me a line in my contact page or ping me on Twitter. I’ll still have plenty of time for games.

Just not for sleep.

No, no time for sleep.

Leaf and the Lord of Electricity

I leased a Nissan Leaf in October and apart from when the salesperson dubbed me Lord of Electricity an made me wear a special hat, it all went quite smoothly.

Several months and a thousand miles later and I’m ready to report on my experience. I’ve driven my Leaf in bad weather, around town, and on the big highway. It’s had its chance to impress me.

I never want to buy another combustion engine vehicle.

That’s not to say the Leaf is perfect. It’s not. The range is too short and the Lightning Cannon never worked properly even once. Despite those shortcomings, I love the vehicle. Here are a few observations I’ve made:

What are the annoying parts that break on our cars? Mufflers? Radiators? Brakes? You know what? The Leaf doesn’t have them, so they can’t break. There aren’t even any oil changes!

Ok, we might have brakes. It’s a little unclear. Still, there’s a lot missing on this car. All that extra waste heat and exhaust that combustion engines need to deal with? We don’t really have that here. Not at the same scale, anyway. It’s kinda nice.

It’s winter in Minnesota. What the hell is waste heat?

Well, the heater is a big deal in the Leaf. It never really seems to heat the air up. I imagine that’s because I’m not getting the benefit of all that wasted energy, but I don’t really know.

Also, in a gasoline vehicle you never really think about your heater using energy. In an EV, absolutely everything you do impacts miles. Turn the heater on and you’re likely to shave miles off the distance between charges. Noticeable miles.

With our steering wheels heated in the cold winter, we will drive like kings, my friends. Like kings.

There is also this remote climate control, which I’ve used a few times. The app for my phone is absolute garbage, but if you are patient enough to click through a few long pauses, you can turn your heater on from anywhere. Anywhere! It almost makes Minnesota bearable. (not really)

I thought I was leasing a low-end Tesla wannabe. It is. Don’t get me wrong. It really is. But wow, the Leaf really moves. Not only does it accelerate fast enough to cause neck pains, but it also corners well. I guess that’s something to do with low center of gravity. Maybe. I don’t care. It is genuinely fun to drive.

The electric motor is far more responsive than those gas ones I’m used to. When I go back to my other car I notice the delay between pressing the accelerator and going forward. It’s annoying.

Guy walks up. “Hey, man. You wanna see liberal? Check this out.” He shows me his Wellstone tattoo.

The guy takes a bite of kale and shows his knuckles sport tattoos S-O-L-A-R and F-A-R-M, with letters squeezed in because he doesn’t have enough fingers for “solar” but hadn’t thought it through before starting the tattoo.

He looks down at me, his recycled hemp shirt smelling like all-natural eco-friendly laundry detergent.

I pull out my phone, push a few buttons. My Leaf crashes through a window.

“Yeah, Leaf,” I say. “This place is a little too conservative for my tastes.”
The guy’s jaw hangs open as I drive silently away.

Liberal cred is not actually what I like about the car. In fact, it’s kind of annoying to me that EVs are considered to be liberal cred. The electric motor is, in my mind, better than the combustion engine in every way. It’s more efficient, more powerful, quieter, less likely to kill you when you’re parked somewhere making out, and less likely to bathe you in gasoline and set you on fire. From an engineer’s standpoint there is absolutely no doubt what the better technology is.

There should be no liberal/conservative bias here, and it’s a big problem that there is.

Ok, this is a serious problem, too. With my other vehicle, I use the car wash at the gas station. I haven’t been to a gas station in several months now and my Leaf i 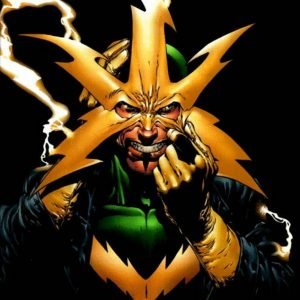 s absolutely filthy. The backup camera is getting hard to see through.

I seriously have no idea what to do about this. I’m not sure I’m allowed near a gas station. What do I do?

So yeah. I like my Leaf. I’d buy another one in an instant. By the time I’m in the market for a car again, there will probably be more EV options than there are now. I will have one of them.

I will never relinquish my title as a Lord of Electricity.