Support me on Patreon for monthly updates and/or writing advice. 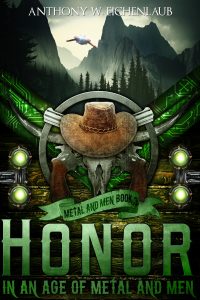 War blazes all around, but it’s not J.D.’s war. Not this time.

There are two bounties out for Francis William Brown. One alive. One dead. J.D. finally catches the man he’s been after all these years when Francis comes without hardly a fight.

But it ain’t ever that simple. A bullet in the skull would be proper for what Francis has done but keeping him alive might be the key to ending the war that’s tearing Texas apart. J.D. needs to decide if keeping a promise and ending the war is worth the risk of seeing the worst criminal in the history of Texas walk free.

An itch at the back of his skull tells him that maybe all this is part of Francis’ plan.

Will he kill Francis in cold blood, or is there still Honor in an Age of Metal and Men?

Technology has boomed in the years since Texas became independent. Antigravity’s cheap. Weapons shoot all manner of energy. Human modification has become as common as football on a Friday night.

Yet, not everyone embraces technology.

When a rancher is murdered, Sheriff J.D. Crow calls upon his old-fashioned tracking skills to find the killer. When the trail leads him to a complex conspiracy, J.D. is forced to confront the very core of his beliefs. Doing the right thing has always been straightforward, but now things don’t seem so simple.

What does it mean to hold hard the line of Justice in an Age of Metal and Men?

Something ain’t right in the town of Swallow Hill.

A boy’s cold blooded murder yanks J.D. from his life of peace. Guilt at past failures drives him, but soon the problem in Swallow Hill proves to be too much to solve alone. Problem is, there’s nobody he can trust: not his old war buddy, not the sheriff, and definitely not the good-looking gentleman from the city. Seems everyone around wants him to shoot someone else.

J.D. has to decide: is he going to go in guns blazing or is there a better way? Can there possibly be Peace in an Age of Metal and Men?

Welcome to the Republic of Texas, a country mined from the rubble of a fallen America and forged into steel by civil war and unending corporate conflict. Technology and neglect made this country what it is. It’s near as wild as it was after America wrestled it from the native civilizations. Maybe more so. It’s a tough place to make a living, but it’s home and on a good day it’s a bounty hunter’s gold mine.

Winston Brand was a bounty hunter, but nothing felt like a gold mine when he woke after a battle he didn’t remember. By the looks of it, it wasn’t a battle he’d won. All he knew was that Goodwin was paying good money to find a girl. There were other hunters after the girl, too, so Winston hardly had time to ask himself the question:

Why does Chester Goodwin want his own daughter back “dead or alive”?